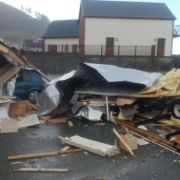 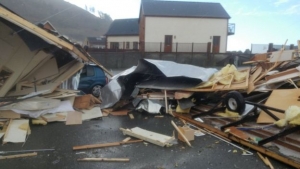 Winds of up to 94mph have brought chaos to parts of Wales, leaving properties damaged and trees torn down.

Aberystwyth in Ceredigion bore the brunt, with reports of a small tornado sweeping across the area.

Trees and roof tiles were blown into roads, with several being forced to close but Dyfed-Powys Police said no injuries had been reported.

BBC Weather said there had been “a few small tornadoes” across parts of Wales and the Midlands.

The RNLI station in Aberystwyth recorded the strongest gust of 94mph shortly after 10:30 GMT.

About 600 households were without power for part of the day due to the weather.

Scottish Power said service had been restored to about 35 customers in Pwllheli after a thunderstorm knocked out their power.

Western Power said most of its customers have also had their power restored but it was still dealing with six incidents across south and west Wales, affecting 308 customers.

Thomas Scarrott, director of the Clarach Bay Holiday Village, near Aberystwyth, said 15 to 20 caravans were upended and overturned by what he described as a tornado. Others had their roofs ripped off.

Setting The Standards In Claims Service
Scroll to top
We use cookies on our website to give you the most relevant experience by remembering your preferences and repeat visits. By clicking “Accept All”, you consent to the use of ALL the cookies. However, you may visit "Cookie Settings" to provide a controlled consent.
Cookie SettingsAccept All
Manage consent

This website uses cookies to improve your experience while you navigate through the website. Out of these, the cookies that are categorised as necessary are stored on your browser as they are essential for the working of basic functionalities of the website. We also use third-party cookies that help us analyse and understand how you use this website. These cookies will be stored in your browser only with your consent. You also have the option to opt-out of these cookies. But opting out of some of these cookies may affect your browsing experience.
Necessary Always Enabled
Necessary cookies are absolutely essential for the website to function properly. These cookies ensure basic functionalities and security features of the website, anonymously.
Functional
Functional cookies help to perform certain functionalities like sharing the content of the website on social media platforms, collect feedbacks, and other third-party features.
Performance
Performance cookies are used to understand and analyse the key performance indexes of the website which helps in delivering a better user experience for the visitors.
Analytics
Analytical cookies are used to understand how visitors interact with the website. These cookies help provide information on metrics the number of visitors, bounce rate, traffic source, etc.
SAVE & ACCEPT